What Is Mobile Application Development Stack? 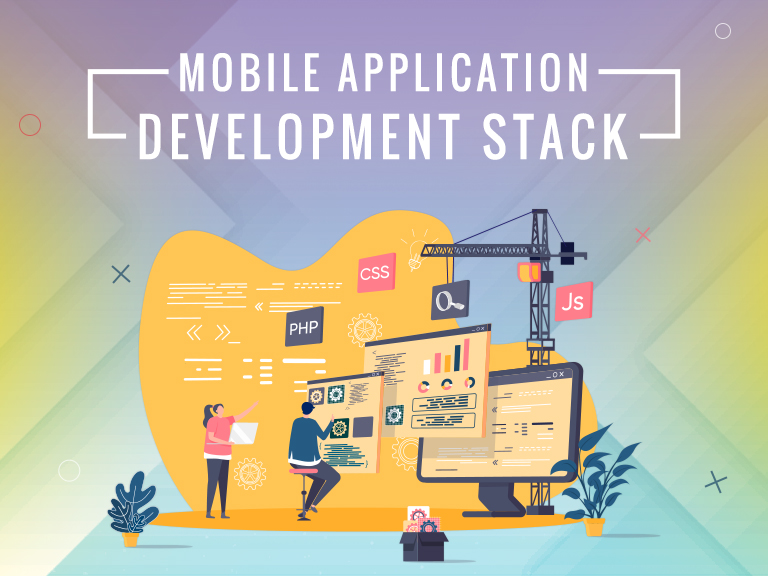 Just like a house is built using multiple components, tools, bricks, doors, walls, and other elements, a software application is also a set of several different parts. Contrary to a physical collection of tools, an application needs different technologies to develop an application that works on a smartphone or tablet.

Frontend technology refers to the tools and used to develop the interface that interacts with end-users.

Backend technology is said to be those tools and software required to build the underlying processing on the server-side of the application.

Development tools include a unified platform or environment offering necessary libraries, interfaces, and tools to develop the application.

Other involved technologies and tools contribute to improving security, usability, and the performance of the mobile app.

Different technology is available for building an app for different platforms. Depending on your need for mobile app development platforms, you can target the desired technology stack.

Java is considered the most popular programming language for building Android mobile apps. Since many tech giants use this language for their app development, it is well supported and scalable. While developing an app using Java, you get access to a wide variety of tools, interfaces, and libraries to choose from.

The second most popular language for building android mobile apps is Kotlin. Despite launching in 2011, Kotlin made a great impact among app developers in no time. It became developers’ favorite due to several reasons. The app offers a cleaner code while saving a lot of developers’ time writing redundant lines of code. As compared to Java, it allows developers to write almost 30% lesser code. Moreover, Google has declared Kotlin as an official Android application development language.

Android Studio is the official application development platform. This platform is based on Jetbrain’s technology. The platform is commonly known for providing an intuitive interface for developers to build Android applications.

Jetpack is a modern UI toolkit that enables developers to define the UI elements of a modern app design. The toolkit helps developers render the templates dynamically.

Similar to the requirements for Android app development, there is a certain set of tools are required for iOS App development.

The iOS app was originally coded in this language, and Apple supports it on its platform. However, it isn’t an easy task to build an app in Objective-C, and developers usually make mistakes when they use it.

Developers prefer Swift over Objective-C because it is a relatively new programming language introduced in 2014. With its safer syntax, fewer mistakes are made, and apps are developed in much less time. As Swift is easier to learn and master, it’s also easier to find developers who know it.

Apple’s official development tool is XCode, and regardless of whether you use Swift or Objective-C, it’s your preferred platform. You can use it to create native iOS mobile apps with features such as a visual interface builder.

As an open-source alternative to XCode, AppCode was developed by a 3rd party. Despite allowing iOS mobile app development, AppCode lacks some of XCode’s capabilities. Thus, it is still dependent upon XCode to some extent.

With SwiftUI, users can design UI elements in iOS apps more efficiently. This app only works with IOS 13 and above, and the resource allocation is limited as it was only launched in 2019.

When building an app for both Android and iOS, a Cross-platform app development tech stack will minimize the need for multiple codebases. The emergence of cross-platform apps has led to reductions in development costs and time to market. As a disadvantage, this limits your functionality to what the toolkit can do. Cross-platform development does not allow you to access some device-specific features.

For those looking to develop cross-platform apps, React Native is arguably the top choice. It uses JavaScript and offers a set of basic building blocks that work on both platforms.

The Flutter cross-platform development tool from Google includes support for iOS, Android, and Windows. In addition, it is equipped with a ‘hot reload’ so that you do not waste time in emulators or simulators.

Xamarin is a natural choice for developers proficient in C# who wish to build cross-platform apps. These native programs are cross-compiled from C# to Android and iOS.

As mentioned earlier, the back end handles the server side of an application system, including business logic, data management, authentications, and other components crucial to the app. Therefore, it requires a different combination of technology. Typically, the backend technology stack for mobile application development includes programming languages, frameworks, databases, and hosting providers.