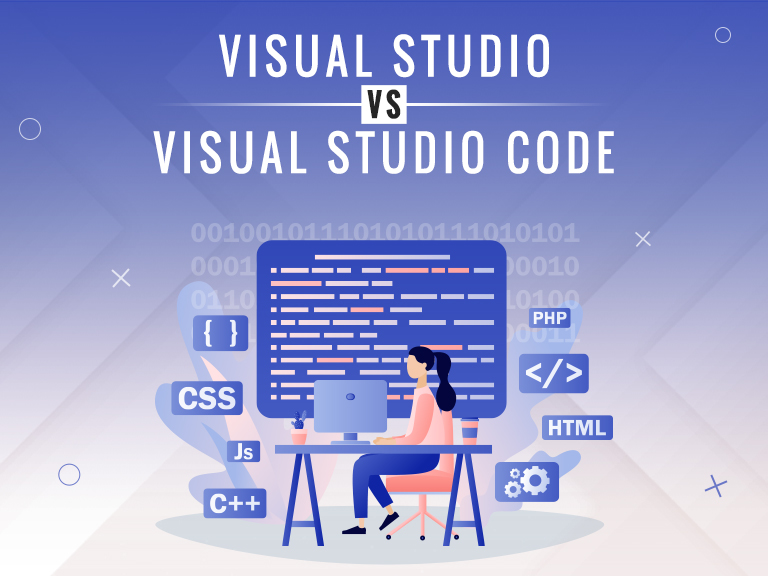 The choice between Visual Studio Code and Visual Studio isn’t as simple as it seems. Seemingly, all you have to choose is between a lightweight editor and a heavyweight IDE. However, it heavily depends on the type of work you want to do and what are your project requirements. Visual Studio Code offers great configuration flexibility, while Visual Studio offers more robust functionality. Both your work style and the language support and features you need may play a role in your selection. Let’s compare these two tools in terms of their capabilities and tradeoffs.

Visual Studio is an IDE that contains all the features you need for project development. It can be used for things like code auto-completion, debuggers, database integration, server setup, and configurations.

It is a comprehensive solution primarily used by and for .NET developers. All kinds of tools are included, from source control to bug tracking to deployment tools, etc. Everything needed for development is included.

It is commonly used on .NET-related projects but can also be used for other projects. The community version is free, but to make full use of it, you need to pay.

Visual Studio as a Powerful IDE

Visual Studio is aimed at being the most powerful IDE (integrated development environment) in the world and provides full-stack development tools, including code completion, a debugger that can debug source code as well as machine code ASP.NET development, and even SQL development.

It’s now possible to create cross-platform applications straight from Visual Studio without leaving the IDE. Depending on the components you select, Visual Studio takes up to 8 GB of disk space.

An integrated development environment is a collection of tools that you need to write and test software. Many tools are used by web developers during the development cycle, including text editors, code libraries, compilers, and test platforms. If these tools all had to be selected, implemented, integrated and managed separately, that would be even more difficult. The process is time-consuming, tedious, and downright frustrating.

These IDEs provide a number of development tools in one framework, application, or service. This simplifies coding, finding, and removing errors and bugs.

You can download an IDE for free or buy one for a price. Also, it can serve as a standalone application or a part of a comprehensive package.

You can inject code into an app and use breakpoints to debug it. You can also call stacks and an interactive console.

Besides the Git feature, the Visual Studio editor lets you push and pull from any hosted SCM service. Apart from this, you can call stacks and an interactive console.

Install extensions to add more features, which will run in separate processes, making sure your editor doesn’t get slowed down. Additional languages, themes, debuggers, and services can also be added.

With Microsoft Azure, you can deploy your site developed in any of several programming languages right from the Visual Studio code environment.

What is Visual Studio Code?

With Visual Studio Code, you can edit source code on your desktop and access it through your web browser. It’s available for Windows, macOS, and Linux. It comes with native support for JavaScript, TypeScript, and Node.js as well as many extensions for other languages including C++, C#, Java, Python, PHP, and Go, along with runtimes like .Net and Unity.

Visual Studio Code is commonly known as lightweight and quick among developers and web development services. Besides this, IntelliSense code completion is available for variables, methods, and imported modules; graphical debugging. It also offers linting, multi-cursor editing, parameter hints, and other powerful editing features. Developers can use snazzy code navigation and refactoring and built-in source code control, including Git support. These features are heavily influenced by Visual Studio technology.