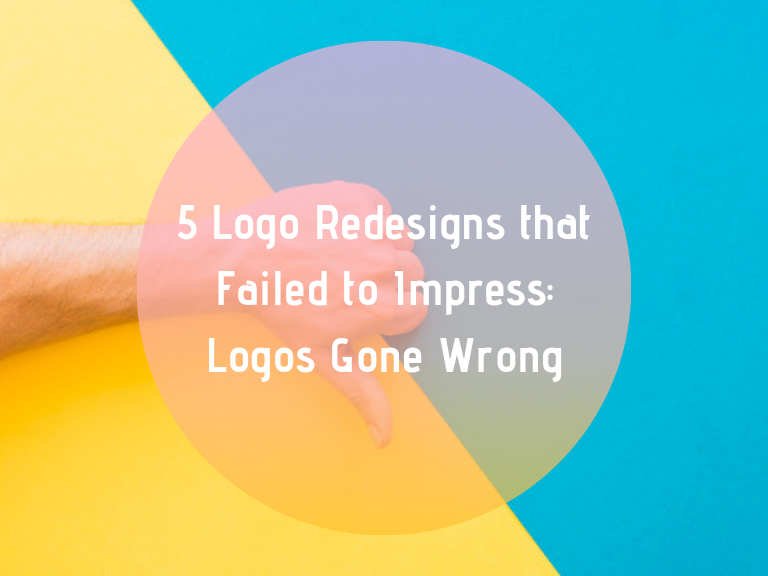 Logo design is considered as your company’s visual figurehead. It is known as one of the most important brand assets that represent your company and make you stand out in the crowd. In other words, logo design is something that you cannot compromise with. Each and every element of your logo must be designed to create an impact. Logos are intended to develop a sense of association with the brand, to stick to the memory of the target audience and call up a particular call to action.

Be it colors, shapes, or fonts; nothing can be random and arbitrary in logo design. From Nike’s swoosh, FedEx’s arrow to McDonald’s arches, history has seen many famous logos which managed to make their mark with memorable and timeless design. At the same time, history has seen many logo redesign blunders- logos that used to be once iconic, underwent a major overhaul only to end up being a total failure.

In this blog, we have rounded up a list of 5 logo redesigns that went incredibly wrong with their design choices. These logo redesigns will help you understand the don’ts of logo design that you should be careful about before embarking on your logo design or redesign journey.

In 2008, Pepsi logo underwent a significant design overhaul. The new logo cost the company $1 million, despite investing a whopping amount new logo did nothing good for the company.  The latest iteration of the logo includes the rotating circular icon as well as a cheeky smile into the design. The upward tilt in the design was meant to embody the company’s growth and prosperity; instead, it turned into something unexpected.

The Arnell Group associated the new logo design from a lot of nonsensical things; Parthenon, Mona Lisa, the golden ratio and radiation are just a few of them. None of these things have to do anything with the cola. But the interesting part is, Pepsi was impressed by the pitch, they bought it for several hundred million dollars- this is how people got a new emoji and yes plenty of memes as well.  All in all, the logo redesign was nothing but a design disaster and is known as one of the best examples of how a logo should not be redesigned.

Kraft new logo failed to impress for not just one but several reasons. In an attempt to more clearly deliver the word “delicious” Kraft went way too overboard and ended up making a total mess out of its logo. Kraft’s old logo was clear, simple and had a 2-color palette. On the contrary, the redesign was filled with unnecessary details. A burst of colors, tilted smile, and cheesy italics failed to deliver a clear brand message. 1 capitalized word, 1 swoosh, 9 colors, 2 fonts- there is too much going on in just one logo.

It feels as if an excited 4 years old filled the colors in the logo, not to mention the tagline written in the italic font which added insult to the injury and made it look even more unprofessional. The logo was ranked as the 6th worst logo redesign by the Brand New. Just after 5 months’ company launched a tweaked logo which was a modification of the previous one. They changed the placement of swoosh, make adjustments to the colors, and replaced the italics with non-italic tagline. All these tweaks couldn’t help the design much, on the contrary, such a quick redesign gave an impression that the company is fickle-minded with their branding decisions.

In 2010 Gap decided to ditch its old design- the blue classic square logo which had been around for several years and had a loyal customer base who had an association with the brand for almost two decades. In an attempt to turn its brand identity from classic to cool, sexy, and modern, the company opted for a significant design overhaul. Conversely came up with a custom logo design that affected its brand identity.

The logo that served the company for almost 20 years got disappeared with no prior warning and got replaced with the word Gap in bold font with a blue square at the right fading from light blue to dark blue. The irony is GAP’s already simple logo was scrapped to design a ‘more simple logo.’ The rebrand cost the company $100 million for a logo that seems as if it had been created using word art. Long story short, the new design garnered severe backlash on the internet, and the company had to revert to their previous logo.

Animal Planet’s original logo was simply adorable- a picture of the globe, with simple font and silhouette of the elephant, had served as a perfect representation of the brand for years. The logo was memorable, and the audience had an emotional connection with the company logo. The logo portrayed a clear picture of the cause the company stands for i.e. preservation of wildlife and planet earth. However, the new logo emerged with a completely different concept. The new logo signifies the raw nature of the animal kingdom.

The 2nd logo was designed by the Dunning Eley Jones, the Animal Planet gave a brief to the designer in which they asked him to create a logo that embodies visceral emotions that denote the animal kingdom. The logo was meant to tap into the instincts that drive both humans and animals- fear, hunger, survival, nurture, and pleasure. The horizontal M of the logo was meant to serve as a unique element of the logo, on the contrary, it failed to impress as it didn’t make any sense.

The logo lost its touch due to the absence of the planet which used to be the primary and unique element of the logo design. The 3rd and most recent version of the logo is a blue emblem which has attempted to bring the original identity back with the well-known elephant of the network’s first logo.

We have seen many confusing and nonsensical logo redesigns but the Cardiff City’s logo redesign outdone everyone with a design overhaul that evoked confusion among the target audience and fans of the team. In 2012 the new owner Vincent Tan decided to change the identity of Cardiff City upside down. He got way too carried away with everything that went in the logo; the color choice, the images, and the shapes, he made all sort of changes that came in his mind.

Imagine the Premier League football team, once known as Bluebirds, now have a pure red logo with a dominant dragon image on it. Adding more to the confusion, Vincent Tan let the team keep their original nickname Bluebirds, and yes he was nice enough to leave a small bluebird image under the red dragon. Nothing could be more confusing and damaging to brand identity than this kind of redesign. Vincent Tan spent an estimated $100 million into the football team rebrand. Not only the monetary cost but the rebrand also cost Cardiff City the trust of their fans.

The 5 logo redesigns explained above teach so much to the brands as well as designer’s community. All of them wasted a huge amount, time, and effort at the same time put the identity of their company on stake but to no avail. If you have been planning a logo redesign, take a pause and ask yourself- do you really need a redesign? If yes, do not go overboard with the design elements in your logo and keep the primary identity intact. Remember a 360-degree overhaul can have your target audience perplexed. So be reasonable with your redesign decisions.